Another garden in the works

My husband and I finally bit the bullet and hired a contractor to pour a concrete patio and driveway for us. We are really excited about the prospect of exiting from the back door without walking across a plywood deck that bounces and shakes with every step. Of course when we go outside we are accompanied by our boys also known as the thundering herd. So with the new patio we will not only be able to enjoy a covered lounge area and solid surface, but we'll also put a stop to the endless trail of dirt falling off these precious little boys' paws all over the floors.

In preparation for the new patio, Harlan and I had to move all the left over pavers as well as our hot tub. My husband found a place for all of the pavers - two pallets full - and I assisted in the struggle to temporarily relocate the hot tub. As we were completing our tasks and I had gathered up the water hose, I actually looked at the area outside of the wall that would soon be all patio. It was pretty disgusting with weedy grass, electrical connections, cable connections, and a huge low spot that obviously fed rain straight into the area we didn't want it to go. It's funny how you can look at various places around the house and never see them until your face is right in front of the offending area. So, with gloves on and kneeling pad at the ready I proceeded to pull all the weeds. In the process I found two little pine tree seedlings and transplanted them where I had been planning to add some new pine trees. After the area was completely clean of debris, Harlan and I started bringing wheelbarrows full of dirt from the mound in the front yard to fill in and build a new garden. 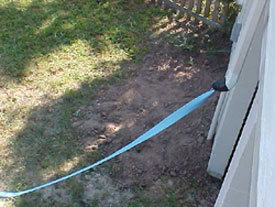 Now I'm really excited. Not only are we getting a new patio, we're gaining a new garden. It's in a shade area so I'll have to think about what I'd like to plant. There is already a little holly bush - a volunteer from the bed out front - but otherwise it's a blank slate. I want to do something different that the usual bushes and flowers I normally put in. It's time to go back to my reference books and see what I can find. I'll keep you posted as my new little garden builds. Happy Gardening and keep your eyes open around your home. You may find a new garden area lurking anywhere.

Southern Blogs are back 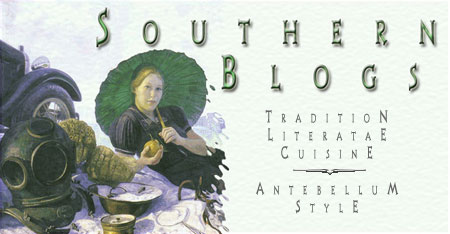 There is a special blog, the Southern Blogs Home, where you can display your Link banner, post comments, make suggestions to expand and improve the Blog Ring and check in with other Southern Blogs for content sharing and link exchanges.

If you were a previous member or a fan who aspires to be a part of this fine southern tradition follow the links below and sign up today. We would love to meet you.

I took pictures of a gorgeous groundcover while in North Carolina and I'll be danged if I can figure out how to download the pic from my pda. So doing one of the things I'm pretty good at I started searching it out online. And I found it. Hedera colchica Dentata Variegata more commonly known as Persian Ivy grows well in sun or shade and is hardy to zone 10. The one I saw had much more white in the leaves and the pink edging provided an excellent contrast.

As I was searching out this plant in my reference books it suddenly occurred to me that I no longer easily identified plants growing in the north. I used to be pretty doggone good at it. In fact, I was so good at it (not to toot my own horn) that one of my friends used to laugh at me. She would tell people that if they wanted to know what something was, just ask me. Not only would I tell them the common name, more often than not I would also know the botanical one as well. So imagine my disappointment when I realized that I had lost my edge, burned out my northern gardening brain, no longer connected with plants north of zone 11.

Now I will say that after looking at the photo of the groundcover it only took me a couple of tries before I realized it was in the ivy family, which led me to the Persian Ivy. So I guess I haven't totally lost my touch, just taken a slight turn to the south. Truth is I'm getting a little better at recognizing plants here now - at least I can quote the common name of many varieties. With a little more time I may even know the latin names. Happy Gardening or laetus topiarius.

I returned from my trip to North Carolina none the worse for wear having survived five days of training topped off by a grueling exam (I passed). While I was there I took advantage of the difference in climate by admiring the various flowers and shrubs that grow in the fall. The leaves were not yet turning so I didn't get a chance to enjoy that change-of-seasons sign. But I did see something I haven't seen since I moved south - a dandelion! Yes, a dandelion and it actually took me pleasantly by surprise. 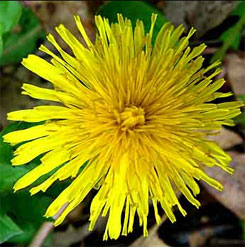 I was crossing the street with a few co-workers coming back from a long lunch. As we paused in the median I happened to look down and was astonished to see a perfect little dandelion on the edge of the grass. I actually stopped to examine it before continuing back with my friends. Now you're probably saying to yourself, heck it's only a dandelion what's the big deal. And in some ways you would be right. But there is beauty in nature and even dandelions are worth admiring. Here in Florida we have something that passes for a dandelion and I think they even call it that. But it's scrawny with a long stem and the flower is red. So to me that isn't a dandelion. Besides, remember back to when you were a kid. If you were like me, you would sit in the grass with your friends, pull up a dandelion and hold it under your chin to see if you liked butter. Silly yes, but I've never forgotten doing it. So the dandelion not only is pretty but brings back cozy memories of childhood. Happy Gardening and the next time you're tempted to toss away a dandelion put it under your chin first.

In prep for my trip

There are many folks who when faced with going on a trip get very organized. Not only do they carefully plan what they're taking with them and when to pack their suitcase, they also do the same with their home. I'm one of those people. You know. Every dish has to be clean, every bed made with fresh sheets, all the laundry washed and put away. I'm the same way with my outside space.

I've been telling my husband over the last few days that I'm going to mow the lawn this weekend. Of course after last weekend's visit from Hurricane Jeanne and the subsequent clean-up, there was no way we could safely mow and trim the lawn until everything had dried out and been put away. So as the week has worn on and thankfully no hurricanes loom on the horizon I've been planning what work I will accomplish in the yard. I kept thinking it was because of all the mess from Jeanne that I was so anxious to get outside but now I know that's not the whole truth. The real reason is because I'm going away.

Yes, going away yet again. I hate it but do it anyway. There are times when I am required to travel for my job. The week coming is no exception. I will be away from home the entire week, the thought of which drives me crazy. Hence the need to have everything in order and all the ducks lined up (only figuratively speaking) before I step on the plane. So my list of things to accomplish before Monday is to visit my parents (they get nervous when I go out of town), mow and trim the lawn, pull a few weeds, trim anything getting a little overgrown, do the laundry and put fresh sheets on the bed. My husband will appreciate that although he's a huge night owl and will most likely spend many of the nights I'm away sleeping on the couch accompanied by our little guys. But when he wakes himself off the sofa long enough to climb up the stairs at 3 AM, he will smell the fresh aroma of clean sheets as he drifts back to sleep. Better than the doggie odor he'll wake up with in the morning as Duncan joins him on my side of the bed. But that's another story. Anyway everything will be tidy in my mind and I'll look even that much more forward to coming home where I belong. Happy Gardening.