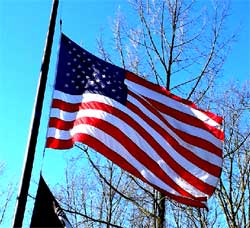 My dad met General Patton. Dad was in the army during World War II stationed in places like Africa, Egypt and Italy. Twice during those three years, Patton came through to survey the troops and spoke words of encouragement to my father. Patton was what legend remembers - 6'6" tall, an imposing figure carrying two pearl-handled pistols at his waist. Dad was lucky enough to return to his family with little physical injury, but always carries with him the horrors of the war he experienced.

My brother served two hitches in Vietnam. He too met some "famous" people but rarely speaks of his experiences there. Tom was scarred by the war emotionally; he was very young at only 17 when he first enlisted and he is haunted often by what he remembers. My brother-in-law Doug also served in Vietnam as did numerous classmates and cousins.

My nephew Doug, Tom's son, experienced Desert Storm. He learned to speak several languages but passed up the opportunity to work for the government as a translator. Luckily, Doug was not wounded and went back home to marry and raise his family.

My nephew JP recently returned from Iraq. He is a career Marine and although initially itching to go over and join his fellow troops, JP was more than excited to return home after several months spent in extremely dangerous situations.

I am exceedingly lucky sitting here today to have my dad, brother and nephews home along with so many other family and friends who have defended our country. There are many, many more men and women who were wounded or killed in service. Memorial Day is a day of remembrance for those who died. It must also be a day to remember those who are still with us who lived through earthly nightmares to keep our nation safe. I am honored to have these brave men as part of my family.

Black gold, rich fuel. No I'm not talking about oil. I'm referring to compost, the stuff of legend your garden craves. People are starting their vegetable gardens now or are in the process of adding new annuals, perennials and shrubs. Many times the first thing they reach for after planting is fertilizer. Then they see insects and grab the pesticide. Compost is a much more effective fertilizer and is actually a great boon to insect control as well. It is comprised of a variety of yard waste, grass clippings, and kitchen scraps. Wood chips, sawdust and leaves are also usually included; meat products should not be added.

Compost conditions the soil enabling it to better hold air and water, drain more efficiently, and feed nutrients to the plants. Soil amended with compost usually produces plants with fewer insect and disease problems by encouraging a larger population of beneficial soil microorganisms that control harmful ones.

Compost is not only good for our plants but it also helps manage environmental concerns. Waste disposal has been and continues to be even more of an issue as landfills are maxed out. Many waste companies are either refusing to take yard waste or are charging extra to do so as it already takes up approximately 30% of filled space.

Anybody can compost. All that's needed is a small area for a bin (homemade or purchased), water, air, some organic material and the desire. Spending a small amount of time each week can help the environment while at the same time improving your soil and the health of your plants. So, who composts? On a larger scale, these students have started Project Compost using 700 to 1000 pounds of food waste from various sources on their campus daily. Then there is the NY City Compost Project, Washington State University Compost Team, and Maine even has a Compost School. There's even more to learn through the US Composting Council. Here at home we've started composting, how about you? Happy Gardening.

Discovery on a grassy bank 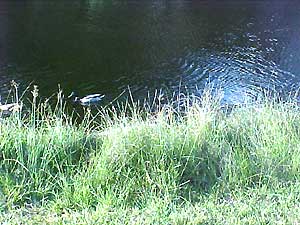 We have waterfront property. Not like the rich and famous, but we are lucky enough to have a small pond at the back of our yard. We made the decision when we moved here that we would not fertilize or use pesticides on our lawn because we didn't want run off into the pond since there are fish and crabs that live there. Of course that was a pretty easy decision for us to make since we have never agreed with putting those things on a lawn to begin with, but that's another story.

The other decision we made was to let the grass grow around the edge of the bank. Of approximately 15 homes facing the pond we are the only ones. Now to their credit, two of our neighbors have allowed cattails to grow and that provides some protection for birds and fish. Back to the reasons we allowed the grass to grow. It About two weeks ago we noticed kind of a hole burrowed through the grass. We didn't think too much of it speculating that it was probably the ducks coming into the yard to hang out at the patio and swim in our pool. Precisely the reason we installed the pool, just for their benefit don't you know. Then our dog Max got curious and stuck his nose in it. We called him to come back to us and he wouldn't budge. The next thing we knew he brought something out of it and dropped it on the ground. It was an egg! 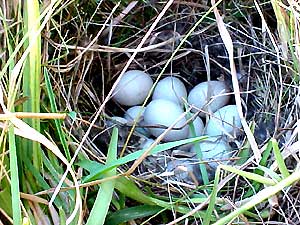 We found a nest with what looks to be about 9 duck eggs in it. Doing some research, we learned that Mallards lay between 8-15 eggs at a time and they take approximately 28 days to hatch. We are now very careful about letting the dogs out without supervision. Max is a mother hen, so to speak, and likes to go over just to check on Mama and her brood every time he is in the yard. 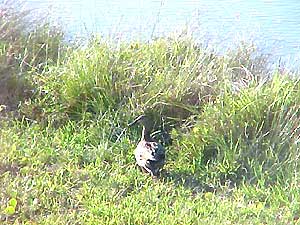 He just can't understand that she really doesn't need his big nose sticking through the grass while she's trying to keep her eggs protected. Oh, that egg he wanted to show us? He was so gentle with it there was no damage. So, in a another week or so we're going to be something - maybe an aunt and uncle? How cool is that. Happy Gardening and we'll keep you posted on the progress of our little extended family.