Tried to grow it in the sun but it wasn't having fun,
tried to grow it on the side but it only tried to hide,
finally placed it in the pond and it's like I waved a magic wand...brilliant red canna blooming happily! 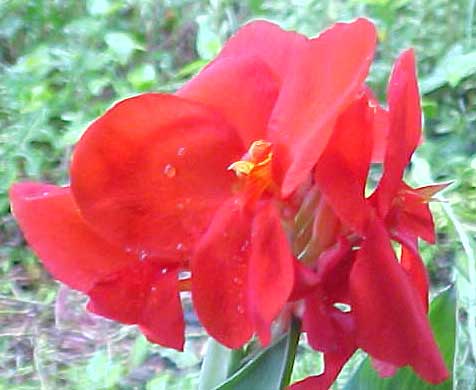 You are now entering

...the Twilight Zone. Do you remember the television series called The Twilight Zone? Each week was a different story about entering a parallel dimension where unexplained things happened. This week I entered my own little personal Twilight Zone. Why? Because I learned a stranger than fiction factoid - Al Capone had a garden!

Come along with me to a time long long ago when gangsters ruled and liquor was prohibited. Follow me as we walk down a street in northern Wisconsin and find ourselves standing in front of an unassuming home called..."The Hideout". Slowly make your way past the front porch to the backyard beyond. There you will see a table and two chairs constructed from tree roots. Picture Al sitting there with his buddies and, as you overhear their conversation, Edward O'Hare says, "What's that heavenly fragrance?" "Well Eddie,that's jasmine. Isn't it wonderful?" exclaims Al Cappone. "If you like that, wait until the morning glories bloom." 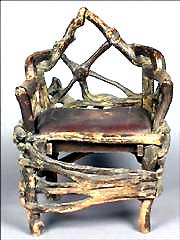 It may be a reach but for all we know Al Cappone may have been a gardener in between his day job schinanigans. He really did have garden furniture at his home in northern Wisconsin and the pieces were later purchased from his old pal Eddie to be sold at auction. Ready to find out their sale price? The table sold for $10,200, the large chair for $7,200 and the smaller chair for $3,360. Total $20,760. Apparently the prices were more than the presale estimates because folks wanted something they could say was owned by Al Capone. An interesting story that really gets a person's mind working toward...the Twilight Zone. Happy Gardening.