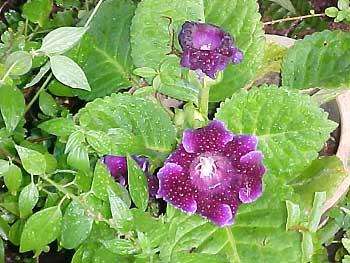 I have had a gloxinia plant for at least four years if not more. When we purchased it we plopped it into a terra cotta pot, watered it and put it in a semi-shady spot. That's it. It's never been fed or pampered yet here it is several years later just as gorgeous as the day we brought it home. Gloxinia, or Sinningia speciosa, is from Brazil and is usually considered an indoor or greenhouse plant. It likes some water and temps in the 70s. The flowers are absolutely gorgeous and look just like velvet. This picture was taken late day just as I finished watering the gardens.

Did you know there is a Gloxinia society? Yep - the American Gloxinia & Gesneriad Society probably has a club near you. What is gesneriad, you ask? Well, it's a family of over 2500 plants best known for the African Violet. Learn something new every day. Happy Gardening.

Every day when I walk up the stairs to our front porch I get a whiff of lemon. It's one of the cleanest, most refreshing smells and all I ever get is just a hint of it. Not an overpowering smell like someone who puts on too much perfume but just enough to make a person turn their head and wonder where the scent is coming from. It's the lemon geranium! 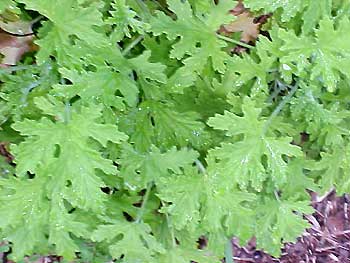 The first time I ever learned of this plant was when my husband and I went to Charlottesville, VA and visited Monticello, home of Thomas Jefferson. There were plants on the property available for sale that supposedly he had grown and among those were scented geraniums. We purchased the rose and lemon geraniums.

We had not seen them in Florida until recently when Lowe's was offering "mosquito plants". Same thing. The plant is a lemon balm geranium actually known as a pelargonium and I'm guessing the citrus smell supposedly keeps the skeeters at bay. We brought two home and they have grown into a mass about 4 feet wide by about 2 feet in height. I'm planning to make some cuttings and spread them around the entire yard, it's just that refreshing to smell!

I learned that there is a lemon geranium and a lemon balm geranium - the difference is primarily in the size of the leaves - but any way you cut it, no pun intended, it's a great plant to have in the garden. Happy Gardening and be sure to give it a try. 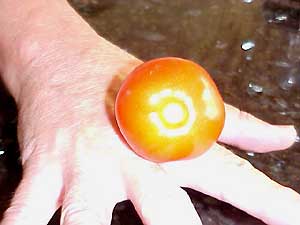 I finally did it - I grew tomatos for the first time since we moved here. Now granted I cheated just a bit by purchasing a tomato plant that had a couple of fruit already started. But the real trick was keeping the thing alive long enough to harvest the fruit. The proof that I am not a tomato killer is in. Not only have we enjoyed three tomatos from this little plant there is still at least one more growing. I don't know if the secret is that I put it on the front porch rather than planting it in the garden or that it is within view of the kitchen so it gets watered more frequently. Whatever it is I finally earned my tomato thumb. Happy Gardening.

In searching through a perennial reference book today I was struck by the silliness of some of the plant names I read. Birthwort - it's actually wild ginger, but where the heck did the name come from? I have visions of a big wart being conceived and growing beyond all proportion. How about Saxifrage? Is that anything like supercalifragilistic... you know the rest. It's actually Astilbe. 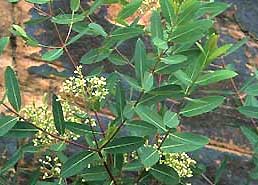 Some names conjure up visions of walking through flowering meadows like Buttercup family. Some remind me of England, for some reason, like Bellflower family. But the one that really got me chuckling was the Fumitory family. The plant is actually Dicentra or bleeding heart but all I could envision was someone stomping around yelling and screaming at the top of their lungs. There's plenty more where these came from - Spurge, Lizard's Tail, Figwort, Smartweed, Rue (like the gravy), and one of my personal favorites, Madder (madder as a hatter?). Oh well, call them what they will (a rose by any other name and all that) all plants are pleasing in their own way. But when the Dogbane shows up, I'm getting the flea spray. Happy Gardening.