Did anyone say hard drive? 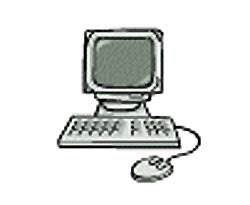 Well, it happened. My brand new HP computer hit a snag going 100 miles an hour around dead man's curve. I was busy surfing the net, doing my usual garden research and all of a sudden my computer came to a screeching halt and refused to go any further. After attempting to restart the computer several times and getting a "primary master hard disk error" it occurred to me that I had worked the thing so hard it decided to die on me. So I did what any adult would do - I screamed out a few choice words! After I calmed down, I pulled out the manufacturer information and called HP Support. The hold time was non-existent and the tech was very courteous, telling me at the very beginning of the call that her goal was to provide me with exceptional service. That impressed me. After just a few questions she agreed with me - the hard disk was fried. Since it was still under warranty, HP would send me a brand new hard drive and, for a nominal fee, a tech would come to my home and install it for me. Now that's a deal.

So two days later (yep it really was only two days since I called) the new hard drive is installed and I'm blogging again. I really have to commend Hewlett Packard for the exceptional service and the speed with which they fixed my problem. Not only did they replace the hard drive without my prodding, but also sent me a set of recovery disks to reinstall the operating system and all the programs originally packed with the computer. The tech who replaced the drive was friendly and knowledgeable and answered all of my questions in real people speak. So bottom line, I'm glad I've got an HP. I've always loved their printers and scanners, and now I can add computers to the list. Oh, did I mention their support line is available 24/7? Happy Gardening.

Comments:
Hi Blogger,
Your blog is wonderful, although Did anyone say hard drive? isn't exactly what I was looking for: gardening presents, but I like the topic and how you wrote it. I am more interested in gardening presents, but during my search for more information I discovered Did anyone say hard drive?, certainly one of the finest blogs I have seen lately!