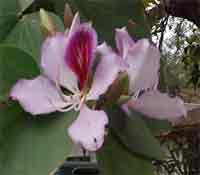 The other day my husband and I were driving through a neighborhood new to us when we stumbled across one of the most gorgeous flowers we have ever seen here in Florida. The flowers, produced by the Orchid tree (Bauhinia blakeana), grow up to 3-4 inches across in shades of white, red, purple, and pink. This deciduous tree is grown in central and south Florida and can reach a height of 25 feet. Leaves are quite large and round.

I've done some digging around (no pun intended) and learned that the tree's flower is actually known as the emblem of Hong Kong. The flower of Bauhinia blakeana was adopted in 1965 and since 1997 has been part of their regional flag. The tree was originally described as a new species in 1908 after being discovered on the shore of Hong Kong Island near Pokfulam around 1880 and was named after a Hong Kong governor, Sir Henry Blake, who apparently had a strong interest in botany. The photo displayed here is courtesy of my husband, press editor of The Green Cutting Board.