My husband and I were discussing how much we enjoy artichokes and wondering how they were grown. Always up for plant research, I learned that there are actually two kinds of artichokes - Jerusalem and Globe. Jerusalem is the type where you can eat the tuber; the Globe is well the globe. You know, the ones you usually see on cooking shows. We've tried preparing the entire vegetable and it's ok, but we prefer the heart so it's easier to purchase the canned variety. But, wouldn't it be nice if we could grow our own? 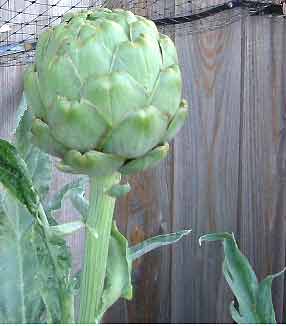 Artichokes were introduced to California in the late 1800s by Italian farmers and here's a bit of trivia, Marilyn Monroe was the first official California Artichoke Queen of Castroville, supposedly the artichoke capital of the world. The vegetable is actually a thistle and a member of the sunflower family. Requiring a temperate climate that remains fairly steady all year round - in other words, no frost and no severe heat - it will grow 6 feet in width and about 4 feet high.

So the question remains - can we grow our own? Nope. Based on what I've read we might be able to but it's just not worth the effort. Not that we have severe heat, but it gets pretty humid and apparently the plant takes a lot of attention. As much as I think I would like the challenge, it will be easier to go to the grocery store and buy Vigo hearts. I'll stick to the stuff I know. Happy Gardening.

Comments:
Hi Blogger,
During my search for information about garden tools, I found your Blog,
although Artichokes isn't exactly what I was looking for, I like the topic and the way you wrote it. My interest goes out to garden tools related information, but I always admire a well written post.

I just stumbled across this post. I don't know how artichokes would fare where you are, but I've grown them successfully here in Portland, OR. They have to be mulched heavily to survive our zone 8 winters though. They do really well in California, where the winters are milder. I don't bother growing them anymore, because they attract so many ants, and I hate to use a bunch of pesticides.